Land Management and flood protection in the Wadi Shaam Basin 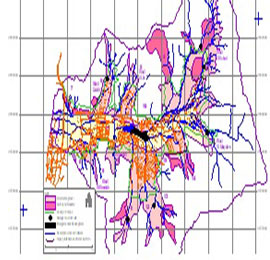 Wadi Shaam is the most northerly wadi in the Emirate of Ras Al Khaimah, draining high mountains along the Musandam border, flowing directly through the small coastal town of Al Qir. There is a small recharge dam in the centre of the basin, and other breaker weirs which slow down surface runoff from steep rocky terrain after intense rainfall, inducing infiltration to groundwater rather than the rapid conveyance of the floodwaters into the sea.

Work involved hydrology and groundwater appraisal to assess the impact of floods, recharge and erosion in Wadi Shaam, so that planned expansion of the urban area and farming activities may proceed with an appropriate knowledge of the risks and extent of protection measures required. Increased numbers of people living in the wadi valley and coastal plain are at risk when flooding.

The Shaam Basin is dominated by grey dolomitic limestone with of the Musandam Group, with broad gravel fans and a flat alluvial corridor which start abruptly at the base of a massive limestone wall at the eastern end of the basin. Flood estimates included simulation of the 100 year flood for the using an MSF [Modified single Flow] model developed at Zurich University to predict the result of natural floods and also a dam breach. Erosion in the basin and dam sedimentation was simulated using GLEAMS [Groundwater Loading Effects of Agric Management Systems] predicting sediment load for different combinations of slope, land cover and geology which were mapped on a grid cell basis using ArcGIS and DTM supplied by the client. Mean annual sediment loads were calculated up to 33kg/ha. Slope stabilisation features were designed to minimise erosion and entry of sediment into the wadi channels, including netting, construction of concrete dykes, geo and bio-engineering solutions at key locations. Particular attention was given to stabilisation of loose talus, reduction of the down-valley movement of alluvium and gravel, and prevention of rockfall where close to highways or residential areas. Capparis cartilaginea was considered for erosion control, found naturally at a number of locations in Wadi Shaam, growing on rock and scree. In addition to using local vegetation, introduction of Carpobrotus edulis or similar species may be appropriate to bind together loose alluvial deposits.