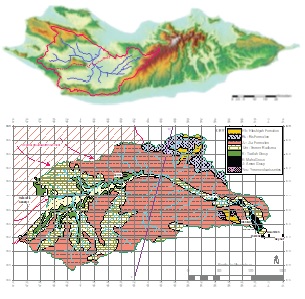 Client: Ministry of Agriculture and Irrigation in Yemen
Period of assignment: 2011
Location: Yemen
In collaboration with: WRA

The WRA team worked with Reservoir Safety Services, to complete pre-feasibility studies of two dams in Yemen at Sayhut on the mainland and Noujad on Socotra Island. Civil unrest in the country affected travel to the proposed dam sites, so the project was completed using primarily remote sensing and TRMM data.

Sayhut dam on Wadi Al Masilah will provide six Mm3/year irrigation for 900 ha of the coastal plain. This wadi has a perennial discharge to the sea, from groundwater in the Mukallah Sandstone aquifer, and work focused on the lower basin, an area of 46,306 km2. Only the largest floods from the Hadramaut valley pass through the dry sector to reach the coastal plain. A potential annual runoff of 287 Mm3 was calculated for the whole basin but, due to losses, a yield of 28 Mm3/year was estimated for the proposed dam. The Noujad Dam catchment of 891km2 comprises a block-faulted limestone plateau with two gravel plains. The primary purpose of the Socotra scheme is to recharge groundwater in the coastal plain where water supplies are currently obtained from wells and karifs. Most of the islanders in the Noujad catchment are engaged in livestock rearing, supplemented in the coastal villages by fishing. The provision of water to help animals survive prolonged dry periods is a prime objective of the Noujad scheme, as well as enhancing supplies for domestic use.

Careful consideration needs to be given to the identification of wadi flows lost to the sea that could be stored for later release, to ensure that existing supplies will not deteriorate from dam construction. It is envisaged that staged development would be most appropriate, due to uncertainties such as karsticity and watertightness of the reservoir basins and the likely future use and needs of the system. Catchment mapping for the project was based on 90m resolution USGS digital terrain model [DTM] tiles, covering the Yemen mainland and Socotra. Analysis of the DTM using ArcGIS then allowed the definition of both catchment boundaries and wadi flow-paths, checked against satellite imagery and soviet mapping.